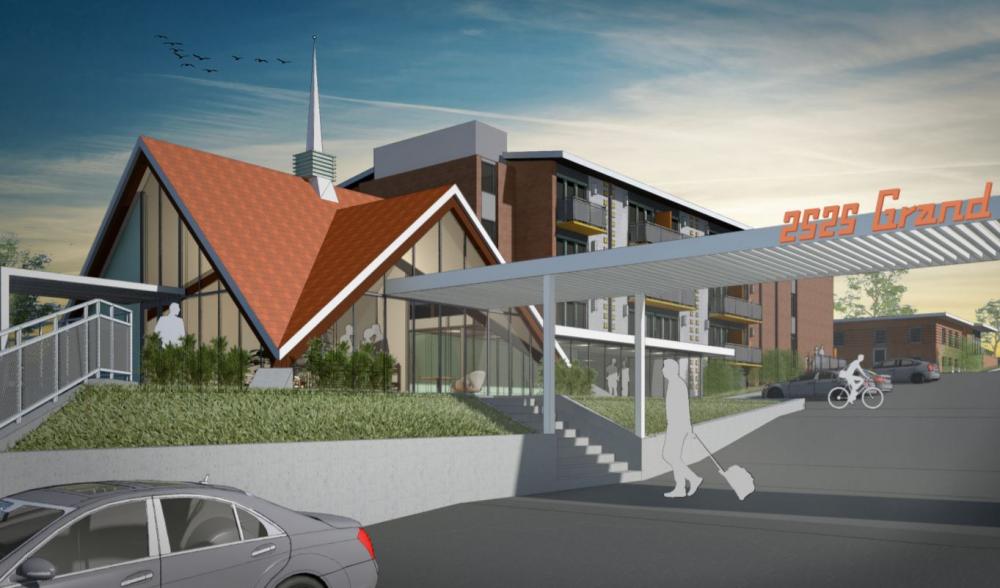 The pandemic has prompted Des Moines developer Jake Christensen to put on hold plans to restore property at 2525 Grand Ave. to its original use as hotel. Architectural rendering by Slingshot Architecture

What: Renovation of former motor lodge-turned-apartments back to original useWhere: 2525 Grand Ave. in Des MoinesEstimated project costs: $18.3 millionDeveloper: Jake ChristensenArchitect: Slingshot ArchitectureBackground and Update: Plans to restore a Des Moines structure to its original use as a hotel are on hold while the U.S. continues its recovery from the effect of the novel coronavirus, the project’s developer said.“We’ve put it on hold … and we will reevaluate the position after the first of the year,” said developer Jake Christensen, who is a member of the Des Moines Airport Authority board and the Greater Des Moines Convention and Visitors Bureau board. “Travel statistic are rebounding, albeit slowly. They are nowhere near normal but they are trending in the right direction.
“We’re going to continue to watch those trends and, in the spring, hope that we can begin making plans for the yearlong renovation.”

The project is the second one involving hotels to be put on hold in recent weeks.

Earlier this month, the Des Moines City Council approved a request from a developer to delay completion of a hotel proposed in Historic East Village. COVID-19’s effects on the hospitality business are among the reasons for the delay, the council was told.

Nearly a year ago, Christensen revealed plans to return a three-story building at 2525 Grand Ave. to its original use as a hotel. A Howard Johnson motor lodge opened at the site in 1962; more than 25 years later, the building was converted to apartments.

The $18.3 million renovation project included renovating the building to have the look and feel of a 1950s-60s hotel. The construction project was supposed to have started last spring, around the time the coronavirus swept through the U.S. The renovation project had been expected to be completed by early 2021. Tenants who lived in the apartment units have been relocated, Christensen said. When work will begin on the project depends on the economy and the country’s recovery from the impact of the virus, he said.Christensen said people are slowly beginning to be comfortable traveling again.“It feels like once a vaccine is at least introduced to the market and, frankly, we get used to this at some level, things will get back to normal,” he said. “If you look at history, there’s been other situations similar to this – polio, H1N1, SARS – and they still needed hotels.”

A Commercial Real Estate Weekly feature in which we update the status of projects underway in the Greater Des Moines area. Want to include an update about your project or suggest a project to include? Email: [email protected]

Any cookies that may not be particularly necessary for the website to function and is used specifically to collect user personal data via analytics, ads, other embedded contents are termed as non-necessary cookies. It is mandatory to procure user consent prior to running these cookies on your website.