Busy supermarkets, popular cafes and even regional pubs have been added to New South Wales’ relentlessly growing list of Covid exposure sites, with a huge list of another 68 venues revealed.

Of the ten close contact sites, meaning people must isolate for 14 days regardless of test results, five are around Byron Bay after a Covid-infected Sydneysider visited the town with his two teenage children, who also have the virus.

Woolworths in Byron Bay, as well as Bangalow Pharmacy and Foodworks in the same village, have all put on high alert, as well as Harvest Cafe in nearby Newrybar.

Busy sites back in Sydney were also exposed, including the popular Aldi on Oxford Street in inner-city Darlinghurst, as well as the Pizza Piatsa Cafe in Erskineville.

The alerts come as NSW suffered its highest every daily tally of cases numbers, a record 356, on Tuesday, indicating there is no end in sight for Sydney’s lockdown, with several regional areas now also crippled by restrictions. A huge list of another 68 Covid exposed venues was revealed on Tuesday night (pictured, a walker at Coogee Beach) 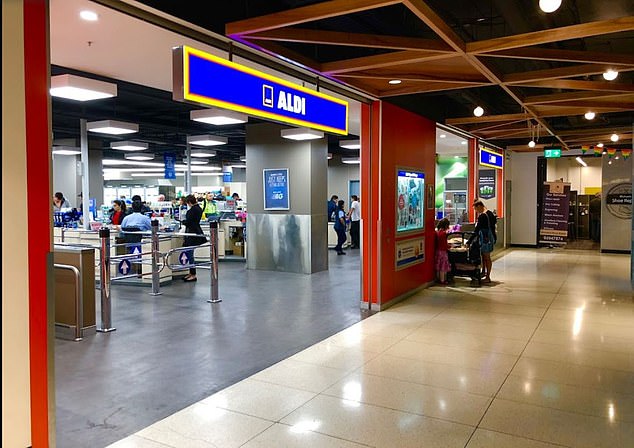 The trendy barbershop Barber Industries in the Newcastle suburb of Kotara is among the ten venues venue that features on the list of new close contact sites.

The Queen’s Wharf Hotel in the newly locked down city was also exposed, as was the Honeysuckle Social.

An array of casual contact sites have also been added to the worrying list of 68 new venues, with Blacktown in the city’s west one of the hardest hit.

A 7-Eleven, Max Brenner, Nando’s, an auto-parts store and a busy Woolworths in the Covid-ravaged suburb all feature on the list of new high-risk sites.

Of huge concern to contact tracers is the popular Balkan Oven Bakery Café in Rockdale in the city’s south, which was been exposed to the virus for more than two weeks.

A 7-Eleven, Max Brenner, Nando’s, an auto-parts store and a busy Woolworths in the Covid-ravaged suburb of Blacktown all feature on the list of new high-risk sites 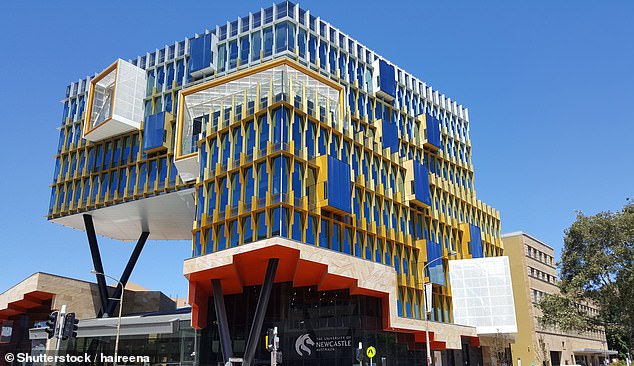 Any customers who visited the café anytime between Saturday, July 24 and Saturday, August 7 has been urged to get tested for Covid-19.

The Newcastle Basketball Stadium in Broadmeadow near the regional city’s CBD has also been put on high alert after it was visited by a positive case of the virus.

The outbreak which has rocked NSW initially began in Sydney’s Bondi on June 10 with an infected driver who worked with international airline crew, but has now spread to the northernmost reaches of the state as well as inland regional areas such as Tamworth and Armidale.

FIND THE LATEST EXPOSURE SITES NEAR YOU:

Anyone who visited these locations at the listed times is a close contact and must get a Covid test immediately and self-isolate for 14 days, regardless of the test result.

Byron Bay Japonaise Kitchen on August 6 between 5pm and 5.30pm

Byron Bay Woolworths on August 4 between 2.30pm and 4pm

Anyone who travelled on the following bus routes at the listed times is a close contact and must get tested and isolate for 14 days, regardless of the result:

People living in or visiting student accommodation at the University of Newcastle’s Callaghan campus have also been put on high alert.

Anyone who attended the accommodation at the listed times has been advised to get tested immediately and isolate until a negative result is received.

The same advice applies for shoppers who visited the Chester Hill Woolworths on seven separate days over the last two weeks.

And it’s the same story for any customers who visited the Woolworths in Blacktown which was similarly visited by a positive case over seven days. 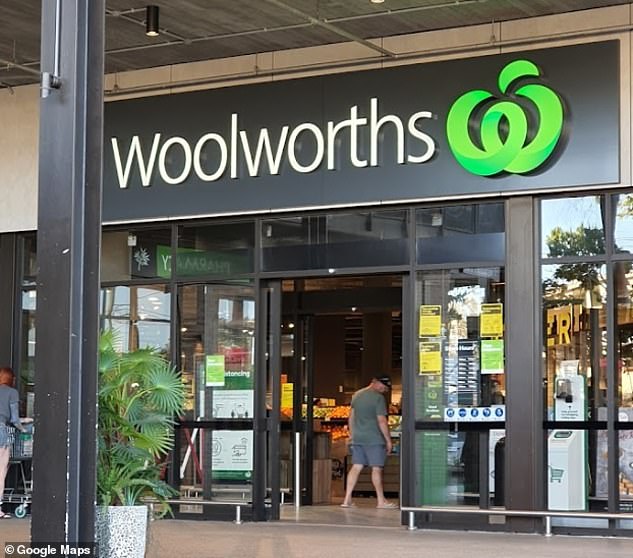 Byron Bay’s Woolworths store was exposed to the virus after a Covid infected man travelled there with his two teenage children, who also tested positive 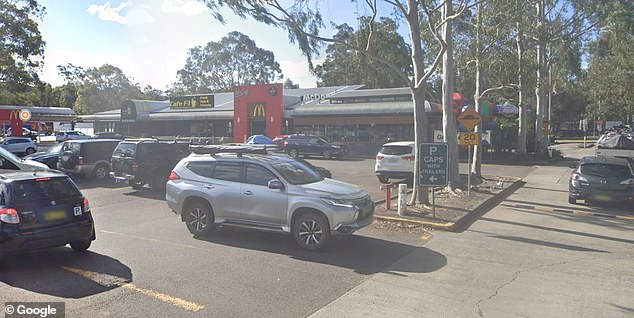 The alerts for new venues in Byron Bay comes after NSW Premier Gladys Berejiklian took the drastic step of shutting down the entire Northern Rivers region on Monday.

The entire region was locked down over fears the Covid-positive man in his 50s who travelled from Sydney may have spread the virus throughout the community.

He travelled from Rose Bay while infected alongside his two teenage children, including a 19-year-old son, who also have the virus, but has since checked into Lismore Base Hospital.

About 300,000 residents who are now under the same tough restrictions as Greater Sydney, Hunter Valley, New England and Tamworth, wait with baited breath as to whether the number of infections in the area will rapidly rise.

The Byron Bay mayor has claimed the man had been unhelpful to contact tracers and ‘does not believe in Covid’. 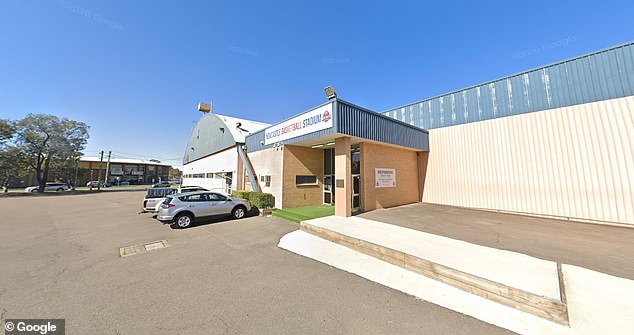 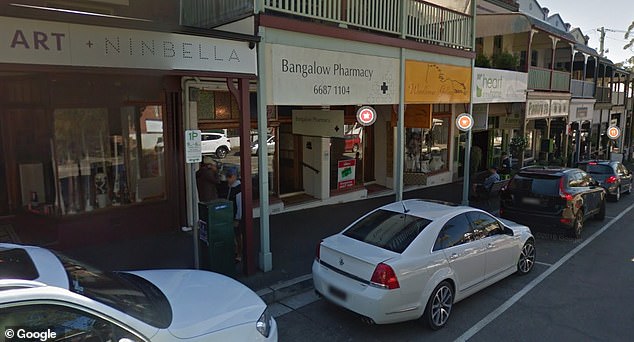 Woolworths and Japonaise Kitchen in Byron Bay, as well as Bangalow Pharmacy (pictured) and Foodworks in the same village, have been put on high alert

The restrictions in the Northern Rivers are the same rules as those already in place across Greater Sydney, as well as Tamworth, Armidale, Newcastle, Lake Macquarie, Maitland, Port Stephens, Singleton, Dungog, Muswellbrook and Cessnock.

The Covid scare in the state’s locked-down city of Tamworth comes after a woman, who was exposed to the virus in Newcastle, visited several venues including a pub, cafe and hotel on August 4.

Ms Berejiklian announced that area’s seven-day lockdown would begin from 5pm on Monday with interstate travel would remain restricted until Greater Sydney got the current Indian Delta outbreak under control. 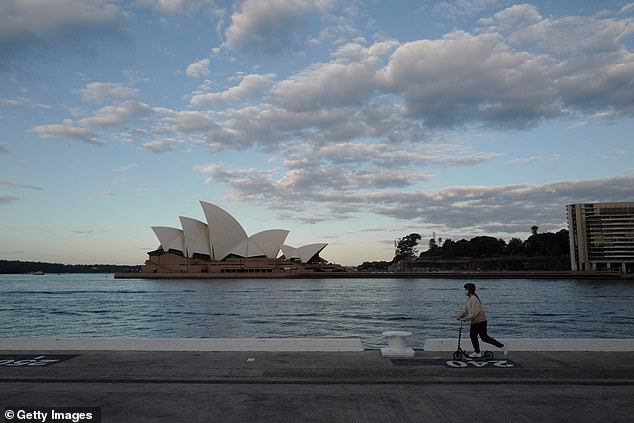 Sydney’s Covid crisis hit record highs on Tuesday as the state recorded another 356 cases with more than 200 infectious in the community (pictured, an eerily quiet Circular Quay on Tuesday)

She also revealed that three more people had died, including a man and a woman from south-west Sydney in their 80s and another man in his 70s from the city’s west.

None of them were vaccinated and all of them died in hospital.

The man in his 80s was connected to the Liverpool Hospital outbreak, which has now infected 29 patients and is linked to six Covid-19 deaths.

Tuesday’s infections include 97 who were out in the community and 157 whose isolation status is unknown – meaning as many as 254 of NSW’s new cases were not self-isolating while contagious.

More than six weeks into a strict stay-at-home lockdown across Greater Sydney, Ms Berejiklian said even the toughest restrictions on daily life would do little to stop the relentless spread of the highly-contagious Delta strain. 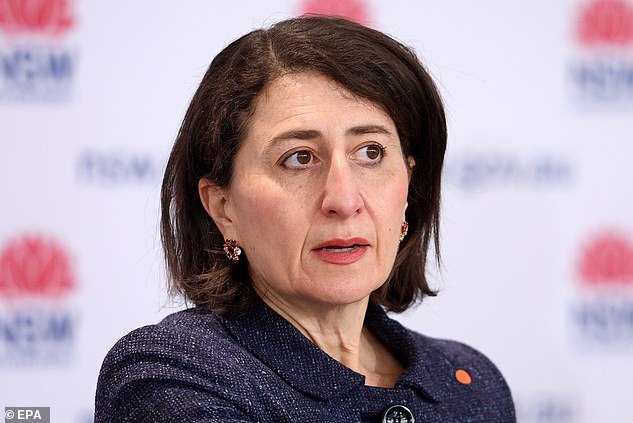 Premier Gladys Berejiklian said on Tuesday three more people had died, including a man and a woman from south-west Sydney in their 80s and another man in his 70s from the city’s west

‘Strategies that may have worked in the past aren’t going to have effect with Delta. It is something we need to accept,’ Ms Berejiklian said.

‘Your approach has to be different. Fortunately, we have what we didn’t have before – a vaccine.’

She said a ‘targeted’ vaccination approach in the city’s Covid-stricken western and south-western suburbs was the only way to drive down transmission of the virus.

‘A targeted approach in those local government areas with our vaccine strategies is key to reducing those case numbers,’ she said.

Health authorities said 234 cases – almost two-thirds of the infections – were found in Sydney’s west and south-west, while the Canterbury-Bankstown LGA emerging over recent days as the new epicentre of the outbreak.

Another 40 cases were found in central Sydney, 38 in the city’s south-east, 24 in the Nepean Blue Mountains and 13 in the Hunter-New England region.