Neamat Rahimi remembers when the blows started raining down.

“I’m lucky they didn’t shoot me. I saw them shooting people.”

Mr Rahimi was trying to push his way through the teeming, chaotic crowds pressing against the walls of Kabul’s airport, holding his Australian passport tightly.

“I was trying to get into the airport. It was very busy. The Taliban try to push the people back. And [that’s when] they beat people.”

Mr Rahimi couldn’t escape the onslaught. He sent the ABC a photo showing vivid purple and black bruising on his shoulder where he was struck.

Now, like hundreds of others, Mr Rahimi is back in Australia, sitting in a quiet Melbourne hotel room while serving out quarantine and trying to come to terms with his tumultuous and terrifying final days in Afghanistan.

He will soon be joined by many more. After a slow start, Australia’s evacuation mission out of Kabul has massively ramped up over the last few days.

More than 2,700 people — including Australians, Australian visa holders and foreign nationals — have now been flown out of the country.

The ABC has spoken to five of those Australians about their escape from Afghanistan.

Read more about the Taliban’s advance in Afghanistan:

Some are still in shock and trying to come to terms with the violence and chaos they witnessed, as well as the sickening fear they felt while wondering if they’d ever get out.

All are deeply relieved to have reached safety, and grateful that the federal government rushed them out of the country.

Most are quick to heap praise on the Australian soldiers and officials who rushed to help them when they reached safety within the US-controlled airport perimeter.

Mr Rahimi said officials helped get him quickly on the plane, while Australian soldiers helped ease his pain from the beating by providing him medication in the United Arab Emirates.

That’s echoed by another Australian — Muftahudin Babackerkhil — who said the Department of Foreign Affairs and Trade (DFAT) officials did an “amazing job” on the ground in Kabul.

“Friendly staff. So polite. They looked after each of us,” he said.

But while some are full of praise for the help they received once inside the airport, almost all are withering about the lack of support they received from the government while they were stuck on the other side of the fence.

The massive crowds which built up around the terminal in the days after the Taliban takeover presented huge logistical and security challenges.

It wasn’t just foreign nationals crowding the gates: countless Afghans without passports or visas who were still desperately hoping to find a way out of the country also flocked to the terminal.

Many Australians and visa holders struggled desperately to get through the crowds or were repulsed by violent Taliban guards who lashed out or fired in the air while trying to press people back. Australian Defence Force personnel rescued over 50 Afghan athletes and dependants. This is the story of how a group of Australian’s came together to orchestrate their daring escape.

The pictures being beamed out of the airport grew increasingly harrowing as the days dragged on, with people dying in stampedes, wading through sewage channels and suffering dehydration in the brutal heat.

But Australian officials and soldiers were given strict instructions not to go beyond the military perimeter set up by US troops, with the Prime Minister saying venturing outside the airport would present an unacceptable security risk to Australian personnel.

That infuriated many of the Australians trying to reach safety who said they felt utterly helpless and abandoned by the Australian government.

Many put countless phone calls into the consular emergency line asking for advice and support but got no response.

Australian citizen Mustafa, who only wants his first name published due to safety concerns, said he had made multiple efforts to get inside the airport with his wife, sister and mother.

“When you actually get to the gates it’s quite impossible, especially when you have women, children or elderly with you,” he said.

Mustafa said DFAT had provided “basically zero” support to get inside the compound and was “ignorant” about the realities on the ground.

He spent days worried the Taliban would storm his apartment, looking for foreigners, and he was ready to destroy his Australian documentation.

Another Australian in Kabul, Wayne Parry, received an email from DFAT directing him to go to the airport “north gate” in the early days of the evacuation effort. But he said specific directions were not provided.

His local driver was not sure where the “north gate” was and he ended up at the wrong place.

Taliban fighters detained him for two hours, along with hundreds of other Afghans trying to enter the airport.

“I was interrogated, at one stage about 25 of them were surrounding me. They’re all armed.”

“It would cost nothing [for DFAT] to include a map of the airport.”

The Taliban eventually let him in and he boarded a US military flight to Qatar.

“I wouldn’t ask anybody to do what I did,” he said.

Finally home, with an element of luck

Another Australian, Mayam, who also did not want her full name published, said she and her 11-year-old daughter only got into the airport because her brother-in-law snuck through the crowds and found an Australian soldier inside the airport.

“It would have been impossible to enter the airport if it wasn’t for the Australian soldier who helped us,” she said.

“Everything was hard, there [were] no lines, hundreds of people were crowded, fighting, and pushing each other. There was no air to breathe.”

In the end, they all found a way through. But there was often an element of luck. 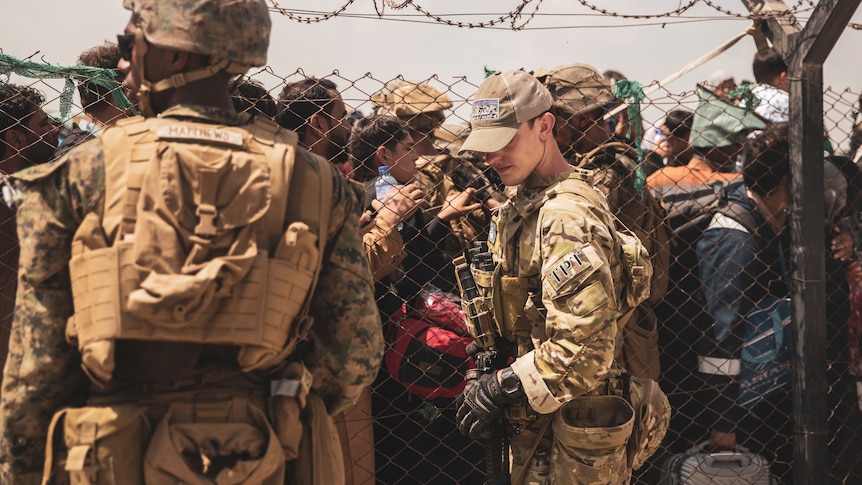 An Afghan journalist who has been crucial to ABC Investigations stories on alleged war crimes has an Australian visa, but can’t get into the airport at Kabul.

Mr Babackerkhil ⁠— who worked as an adviser to former president Ashraf Ghani’s deposed government ⁠— got vital help from a police officer at the airport who recognised him.

The officer shepherded him through the crowds and past multiple checkpoints so he could reach Australian soldiers and officials who put him on the flight back home.

Mr Rahimi said he finally managed to pierce the perimeter after he found a Canadian soldier who agreed to alert Australian Defence Force staff in the airport.

After that, he followed a path which will be traced by hundreds more in coming days ⁠— first a flight to an Australian base in the United Arab Emirates, nestled in the belly of a massive military transport plane.

And then, finally, the long haul back to Australia.

“Finally, we have arrived at Great Melbourne,” he wrote after landing.